Act to Keep Students Safe
A critical window of time is closing to protect America's kids against restraint and seclusion in schools. According to data just released from the U.S. Dept. of Education Office of Civil Rights, 107,000 kids were subjected to physical restraint or were confined to seclusion rooms in schools during the years 2011 and 2012.

To protect kids nationally, Sen. Tom Harkin (D - IA) and Rep. George Miller (D - CA) have introduced the federal Keeping All Students Safe Act (S. 2036/H.R. 1893) that would ban the use of restraints and seclusion in schools except in cases of a bona fide emergency. However, with Sen. Harkin and Rep. Miller, both passionate champions of this issue and legislation, set to retire from Congress at the end of this year, the fate of this bill protecting students against restraint and seclusion in school is uncertain if the bill is not passed during this session.

As a journalist who's covered child welfare issues over four decades, the story of the use of physical restraint and seclusion rooms in schools remains a deeply personal one for me. In 2006, I learned that my daughter Rose, who was six at the time, had been locked inside a broom closet in the basement stairwell of her school in Lexington MA, over a three-month period, sometimes for up to several times in a day. She was found naked, standing in her own pee, after she removed her clothes so as not to soil herself.  I would later write about her horrific treatment, and exposing the widespread use of restraints and seclusion rooms in schools across the country, setting off a firestorm in communities nationwide over these shocking practices.

Parents, journalists and lawmakers mobilized throughout the country and visited their local schools to find out if restraint and seclusion were being used with their kids. In many cases, they were shocked to find out that they were. Over the past 18 months, state and local legislation and rules limiting or banning the use of restraints and seclusion in schools were passed.

In Reno, NV, for example, 12 seclusion rooms that were found to have been in use had their doors removed, were repainted, and other uses were found for the spaces, with Frank Selvaggio, the student service director saying, "The vast majority of our educators would never even think of trying to do something inappropriate like forcing a child to go into a room."

In Oregon, Gov. John Kitzhaber signed a 2013 law that prohibits use of restraints in schools.

And the issue cuts across the legislative aisle: in Arizona, the conservative Republican governor Jan Brewer signed legislation into law in April 2013 that limits the use of seclusion rooms in schools.

However, currently only 19 states have laws on the books restricting the use of physical restraints and seclusion rooms with students in schools.  In Idaho, Mississippi, North Dakota, New Jersey, and South Dakota there have been no laws limiting the use of restraints and seclusion in schools, not even that parents be notified when their children are subjected to these practices. The wide range of rules nationwide has led Rep. George Miller to compare the situation to "the Wild West."

At the February 12 introduction of the Senate Keeping All Students Safe Act, Sen. Harkin compared the seclusion rooms he had seen in schools with cells for terrorists at the military prison that he visited in Guantanamo Cuba (photo below) and Robert Ernst, a former Lexington, MA student, described being dragged into and then locked in a seclusion room in a Lexington, MA school (video at bottom). 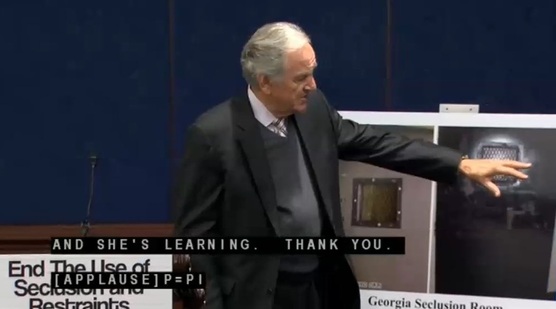 Both sponsors of the bill, Sen. Harkin and Rep. Miller, are retiring from congress in 2014. In their absence, advocates are concerned that it will likely be difficult to get this legislation introduced and passed in future sessions.

"In order for the Keeping All Students Safe Act to become law this Congress, it needs to start moving through committee . . . in the spring or early summer in order to see it pass the full Congress this fall," Julia Krahe, the spokeswoman for Rep. Miller's Committee on Education and the Workforce told the Huffington Post.

Staff members of both the Senate and House committees agree that it's critical that concerned parents, advocates, educators and the public call Washington and let their senators and house representative know how they feel about the use of restraints and seclusion in schools and the importance of the Keeping All Students Safe Act. Without that groundswell of support, they say, the bill may well die.


It's critical that you and others you know pick up the phone and call your federal senators and representative to let them know how you feel about physical restraints and seclusion rooms in school and about the Keeping All Students Safe Act.  You can find the phone numbers for your senators and congressperson by clicking here.
-------------------------------
Bill Lichtenstein with Amy Peterson